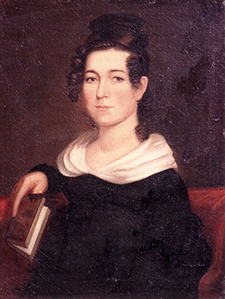 The papers of Mary Easton Sibley.

Papers in this section are transcripts. Scans of the originals will be uploaded (whenever possible) at a future date. Transcripts were created by Lindenwood University undergraduate students.

While Mary Easton moved to St. Louis in 1804, little factual information is known about her early years. Mary married George Champlin Sibley in 1815. Soon after, she moved with her husband to the frontier of the United States, at Fort Osage (near modern day Kansas City, Missouri).

While it can't be proven, it is believed that Mary developed her interest in teaching, while stationed at Fort Osage. This interest blossomed once the Sibleys moved to St. Charles, Missouri in the 1820s. It was here that Mary Easton Sibley became the driving force behind the creation of Lindenwood Female College (now Lindenwood University). In 1856, the Sibleys deeded the school over to the St. Louis Presbytery.

After the United States Civil War, Mary participated (1866-1869) in a Christian charitable organization called the Sisters/House of Bethany that tried to help war widows and the destitute, in the city of St. Louis, Missouri.

Letter to the Lindenwood Board of Directors from Mary Sibley, September 16, 1867, Mary Easton Sibley