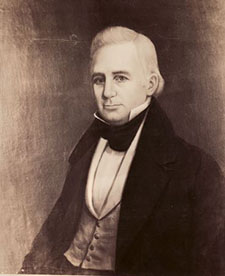 Papers in this section are transcripts. Scans of the originals will be uploaded (whenever possible) at a future date. Transcripts were created by Lindenwood University undergraduate students and historian Kate Gregg.

John Sibley (1757-1837) was the father of George Champlin Sibley. John Sibley had a wide and varied life. Initially living in Massachusetts, Sibley served as a surgeon's assistant during the Revolutionary War. Later, he moved to Fayetteville, North Carolina, where he started a newspaper, the Fayetteville Gazette. He made one final move, to Louisiana, slightly before the U.S. purchase of the Louisiana Territory.

It was Sibley's time in Louisiana that was notable because President Jefferson appointed him as a U.S. agent to the Native Americans in the area. Sibley gave lengthy descriptions of the early settlement of Louisiana, Texas, Native Americans, and the Mexican Revolution.