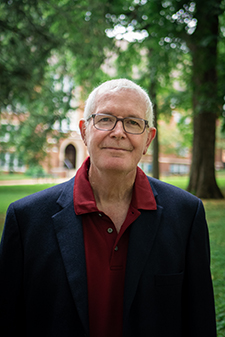 Thinking Aloud, Episode 9 – US Foreign Policy in Afghanistan and Iraq and the Future

“Dr. Marcus” Smith (BA Anderson University, MA University of Cincinnati, Ph.D. Purdue University) is a historian of Modern Middle Eastern and Global history. Born and raised in Ohio, a deployment to Iraq in 2005 with the U.S. Army sparked an interest in the history and cultures of the region which led to subsequent travels in Israel-Palestine and Jordan. Research topics focus on social, political, and cultural relations of minority communities including case studies of Muslim Americans living in Columbus, Ohio 1980s-Present, and the Jewish community in Baghdad, Iraq 1951-Present. His love of history stems from a curiosity about the factors that make for peace or violence in our modern world and is closely linked with social engagement and community service projects.

Dr. Brian Arendt is an Assistant Professor of Chinese Studies and International Relations at Lindenwood University. He has earned a Ph.D. in History from Georgetown University in 1993, and also holds a Master’s degree from SUNY at Stony Brook and a Bachelor’s degree from UM-St. Louis. He has taught courses in South Korea, interned at the World Trade Center in St. Louis, and served as an adjunct instructor with Lindenwood, St. Louis University, Washington University, and Concordia University. He has taught a wide variety of courses, including World History, modern Chinese history, traditional Chinese history, the history of Asia, and international politics. He has presented papers on aspects of Chinese history to the Midwest Association of Asian Studies and the Missouri Conference on History. In 2013 he published an article in Lindenwood University’s Confluence journal entitled, “China and the Louisiana Purchase Exposition.” He is currently working on a project in modern international relations.

Dr. C. Dale Walton is associate professor of International Relations at Lindenwood, as well as a senior research fellow with the John W. Hammond Institute for Free Enterprise. Prior to coming to Lindenwood, he taught at the University of Reading (UK) and Missouri State University. Dr. Walton has published three monographs: Grand Strategy and the Presidency: Foreign Policy, War, and the American Role in the World (2012); Geopolitics and the Great Powers in the Twenty-first Century: Multipolarity and the Revolution in Strategic Perspective (2007); and The Myth of Inevitable U.S. Defeat in Vietnam (2002). He also is one of the co-authors of Understanding Modern Strategy, 2nd ed. (Cambridge University Press, 2016). His academic interests include strategic theory and history, great power politics, and the future of US domestic governance and foreign policy.