by Sabrina Halstead and Kristeen Hicks 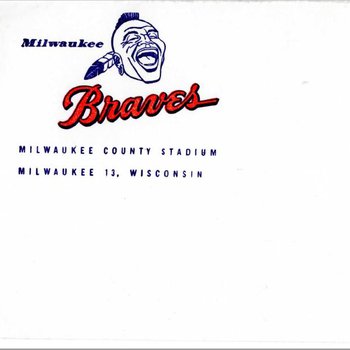 From Up Close Article by Tom Anderson Regarding Jackie Robinson

Mr. Spink was writing to a baseball team in Cleveland called the Indians. The letter in question is dated on April 11, 1960 and it pertains to the 32nd Air Division, an army unit, and they received free Baseball Guides on the dime of Mr. Spink. The President M. H. Wilson Jr. thanked Spink for doing that and thanked him for his contribution towards the military. What stands out in this letter is what we would today consider to be racist of an Indian mascot with the traditional feather on its head with large teeth. In this era, that wouldn’t be perceived as offensive towards any group and people didn’t pay attention to it. It goes to show how attitudes change with race over time and they are constantly changing.

It's no question that the topic of race was more alive than ever in the mid-1900s, with the American civil rights movement and push to abolish Jim Crow laws growingly present. Jackie Robinson was a man recognized for breaking barriers in the MLB world as an African American man, but it wasn’t easy as he faced so much discrimination in so many ways on a daily basis.

When digging through The Sporting News archives, one particular event stood out, the open letter to Robinson that appeared in an editorial on November 1, 1945. Robinson quoted the editorial in his letter to Mr. Spinks: “Robinson at 26, is reported to possess baseball abilities which, were he white, would make him eligible for a trial with, lets say, the Brooklyn Dodgers’ Class B farm at Newport News, if he were six years younger…”, thus beating Robinson down and leading him to write the letter to Mr. Spink. Ultimately, Spink stated in several forms throughout letters back and forth with several people and businesses that he essentially doesn’t see an issue with what SNN published about Robinson. He believes this because as stated in a newspaper, “since your entry into organized ball, The Sporting News has carried many laudatory stories and references to you over a period of years. Yet you single out one alleged slighting reference… and choose to ignore a multitude of favorable comments”.

When looking back at events like this today and you see how people thought it was the black people who always had the issues with people, but in reality it was the world who had any issue with them & it obvious that Robinson fought hard to win the game of race.

The view of Native Americans about the mascots that are used in baseball and other sports is very controversial. Many people were not aware of how these mascots would be viewed years later when Native American would cry out for change due to them being offensive. The use of the Cleveland Indians mascot with a red face, feather in the back and large white teeth is still used today. Until 1994 there was a 28-foot-tall neon sign of Chief Wahoo (mascot's name) that was moved from Municipal Stadium to Western Reserve Society. The use of this sign shows an overhanging light on how Native American mascots are used like idols. It was not until the end of the 2021 season when they decided to change the name of the team from Cleveland Indians to Cleveland Guardians. This is progress but there is still a long way to go. On the other hand, the Milwaukee Braves (now the Atlanta Braves) have continued to use their Native American mascot and even a chant called the Tomahawk Chop, which Native American leaders explain is very offensive since it imitates a swinging motion of a tomahawk which is a well-known battle axe. Owners of these teams with Native American mascots often explain that they are paying tribute to the oldest citizens, but this ideal is not reciprocated by Native leaders. They want the enlarged features of these mascots to end and to transfer their mascots to something less offensive.